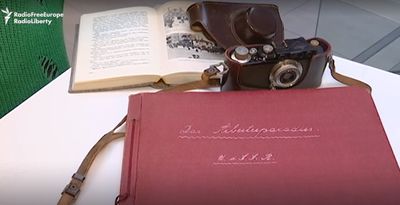 The Holodomor was officially and forcefully denied by its perpetrators and left few photographic traces. Fortunately, the photos of Alexander Wienerberger have survived. These rare and invaluable photographs constitute some of the only visual testimony of a twentieth-century genocide. Wienerberger was an Austrian national who spent a decade and a half after WWI serving as a manager and consultant for chemical factories in the Soviet Union. In late 1932 he was assigned to Kharkiv, then Ukraine’s capital. Wienerberger had recently acquired a new Leica camera, and as spring turned to summer in 1933, he proceeded to secretly document the shocking conditions of famine and destitution unfolding around him. Unable to tolerate the increasing brutality and inhumanity of life under the Bolsheviks, Wienerberger returned to Austria in 1934 and arranged for his photographs to be shipped back via the security of diplomatic mail. Upon his return home, he freely allowed his photographs to be used for anti-Bolshevik propaganda and to support an international campaign for famine relief.
Today, nearly 300 photographs are known to exist which were taken by Alexander Wienerberger during his lifetime. Of these, close to 80 depict scenes from his time in Ukraine – the majority of which are Holodomor-related. They document life in and around Kharkiv, showing the effects of Stalin’s ruthless policies both on the impoverished city residents and on the starving, dying refugees from the devastated rural heartland. This body of work, small in quantity and scope, provides a rare, uncensored glimpse into the life and death of ordinary citizens in Ukraine during the deadliest year of the Holodomor.
Wienerberger‘s contribution was not limited to his photographs; he also published a memoir of his Soviet experiences, yet his work slipped into obscurity. However, over the years a picture of the man has slowly emerged. What we now know of Alexander Wienerberger – who he was, why he took the photos, and the context for his documentation of the Holodomor – is thanks to the efforts of a diverse set of actors over a thirty-year period, including a Ukrainian Catholic priest in Vienna, an international commission that investigated the famine, a researcher in the British Foreign Office archives, scholars from Austria and Kyiv, and a dedicated great-granddaughter. This is their story.
Main Menu → Next Page
Powered by / Alimenté par