Alexander Wienerberger: a Biographical Exhibit
Main Menu → Previous Page → Next Page
Austria: The Later Years
Contents
SummaryPart I: Vienna to the USSRKharkivKharkiv overviewReturn to Austria: 1934-1935Austria: The Later YearsPart II: From obscurity to distinction – The early yearsInto the new millenniumRecognitionOngoing legacyEndnotesWork Cited
Links
Download text (PDF)View the "Alexander Wienerberger: Innitzer Album" collectionView the "Alexander Wienerberger: Beyond the Innitzer album" collection
Wienerberger was half Jewish on his father’s side, a fact that began to cause problems for his family by the time of Germany’s annexation of Austria in 1938. Wienerberger attempted to legally deny his Jewish ethnicity but did not succeed.28 It is at this time that Wienerberger appeared to begin making public anti-Semitic statements. In 1939, he published Hart auf hart about his life in the Soviet Union. This otherwise perceptive, witty, and darkly cynical memoir is filled with anti-Semitic commentary in general, and against “Judeo-Bolsheviks” in particular. The book was first serialized in late 1938 in the daily Salzburger Volksblatt under the title “Abenteuer in Sowjetrussland” [Adventures in Soviet Russia].29 His introduction to the series boasts that his photos had appeared in the recent Antikomintern30 and “Der ewige Jude” [the eternal Jew] exhibits that traveled through Germany and Austria.31 No confirmation of that claim, however, has been found. Interestingly, the heavy-handed racism in his later writing stands in stark contrast to what is presented in the 1934 pamphlet Russland wie es wirklich ist, mentioned earlier. That narrative bore no trace of anti-Semitism; in fact, no record exists of any anti-Semitic activity on Wienerberger’s part prior to the late 1930s.
Wienerberger turned fifty during the early years of WWII, yet this did not keep him from enlisting with the Russian Liberation Army under General Andrey Vlasov in 1944, which was fighting against the Soviet Army.32 He escaped capture at war’s end, but upon returning home, he was arrested by the Allies as a suspected German spy. Following many apparently grueling months in an American prison in Austria, he was finally released after feigning insanity.33 He spent the remaining years of his life occupied with a new paint and furniture polish business in Salzburg, passing away in 1955.34 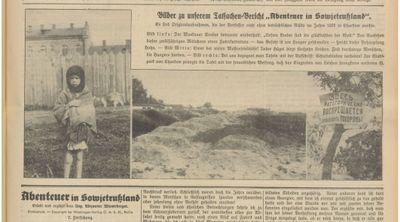 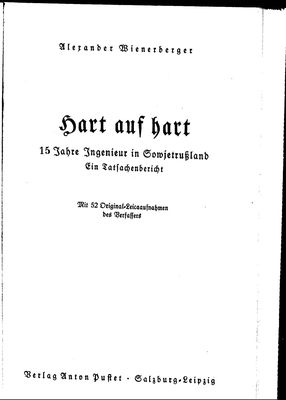