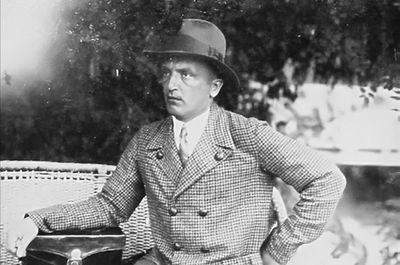 Portrait of Alexander Weinerberger Details
Part I: Life story
Vienna to the USSR
Born in Vienna in 1891, Alexander Wienerberger earned a degree in chemical engineering from the University of Vienna shortly before the outbreak of WWI. He enlisted and served briefly in an elite division of the Austrian military before being captured by the Russians and taken prisoner. Upon his release in 1917, he decided to stay in Russia and together with fellow former inmates opened a laboratory for the production of saccharine and pharmaceuticals. Over the next several years, his business operations were first nationalized then prospered with the greater opportunities for personal investment and profit that became possible under the New Economic Policy (NEP). Nevertheless, Wienerberger ran afoul of the Cheka (the Soviet secret police) and its successor, the GPU, on more than one occasion and was arrested and imprisoned again for several months. By 1927, Wienerberger saw the demise of favorable NEP policies on the horizon and returned to Austria. Having previously divorced his first wife, Josefine Ronimois, he met and married Lilly Zimmermann and returned to Moscow with his new bride in 1928. 1
Wienerberger decided to stay on in Soviet Russia as an officially recognized foreign expert, serving as a technical manager at a succession of chemical manufacturing firms now owned by the government. The Soviet Union had just embarked on its ambitious five-year plan of massive industrialization at a time when the West was entering an economic depression. Wienerberger saw that his professional skills were in demand in the Soviet Union, while in his native Austria his options for employment were decreasing. 2 Energetic and resourceful, Wienerberger never expressed a particular affinity for Bolshevism; rather, he seemed to relish the challenges of outmaneuvering both the Soviet bureaucracy and its secret police – something that he as a foreigner assumed he could do without the fatal consequences that might befall a Soviet citizen. Moreover, life for Wienerberger and his young family was more or less tolerable, given his position as a foreign expert; he had a far better salary and access to better accommodations and food than what was available and declining at an alarming rate for the average Soviet citizen.
Main Menu → Previous Page → Next Page
Powered by / Alimenté par