Alexander Wienerberger: a Biographical Exhibit
Main Menu → Previous Page → Next Page
Recognition
Contents
SummaryPart I: Vienna to the USSRKharkivKharkiv overviewReturn to Austria: 1934-1935Austria: The Later YearsPart II: From obscurity to distinction – The early yearsInto the new millenniumRecognitionOngoing legacyEndnotesWork Cited
Links
Download text (PDF)View the "Alexander Wienerberger: Innitzer Album" collectionView the "Alexander Wienerberger: Beyond the Innitzer album" collection
Recognition
Who Alexander Wienerberger was and why he took the photographs remained a mystery. Fortuitously, Austrian scholar Josef Vogl took up an extensive investigation of Wienerberger’s life while engaged in a project with Dokumentationsarchiv des österreichischen Widerstandes.46 His research in Austria’s federal and local archives, Vienna’s Diocesan Archive, collaboration with colleagues (in particular, Julia Köstenberger),47 and interviews with surviving family resulted in 2015 in Alexander Wienerberger–Fotograf des Holodomor, the first authoritative biographical study of this “photographer of the Holodomor.”48 Vogl not only offers a sketch of the previously hidden details of Wienerberger’s personal life, he reveals how Wienerberger’s damning portrayal of conditions in Ukraine during the Holodomor figured significantly both in the attempted international relief campaign initiated in Austria and in the Austrian vs Soviet propaganda wars.
In England, meanwhile, Wienerberger’s great-granddaughter Samara Pearce had just inherited his camera,49 which had been gathering dust in the possession of another relative. This acquisition became the start of a journey of discovery about a man, a period of history, and a country she barely knew. A university student at the time, Ms. Pearce decided to make the study of her great-grandfather’s life and work the basis of her dissertation, which she defended in 2013. She continues to seek out information related not only to her great-grandfather and his photographs but about the Holodomor and its connection to the current war and life in Ukraine.50
Recently, she discovered among several family albums of photographs taken by Alexander Wienerberger, one that was devoted to his time in Kharkiv, Crimea, and Moscow between the winters of 1932/33 – 1933/34. Twelve of the confirmed Kharkiv photos in that album had not been published prior to the album’s discovery. Sometimes referred to as the “Red Album” because of its red binding, it bears the ironic title Das Arbeiterparadies. U.d.S.S.R. [The Workers’ Paradise, U.S.S.R.] handwritten in white across the cover. (For further details, see “Alexander Wienerberger: Beyond the Innitzer Album, a Collection Note”). Ms. Pearce has also had Wienerberger’s memoir translated into English as Hard Times and hopes to find a publisher. A recent article presents many of the photographs from both the “Red Album” and the memoir, with excerpts from the memoir’s Kharkiv chapters accompanying the images.50,51 Ms. Pearce has graciously made her holdings accessible to researchers, and as copyright holder has granted permission for the use of the photographs, stipulating only that Alexander Wienerberger’s name always accompany his images. Ms. Pearce’s cooperation and commitment has proven vital to what we now know about her great-grandfather’s work. 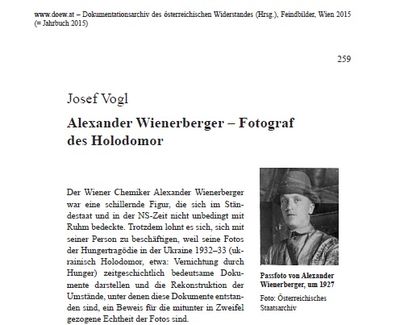 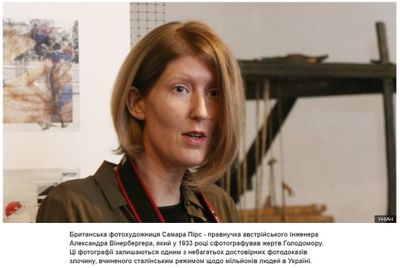