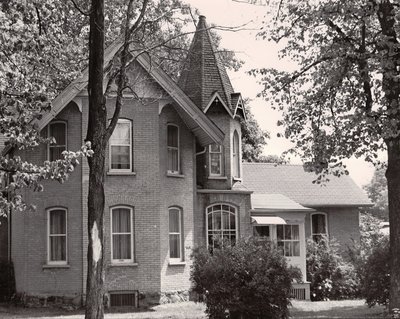 Albert Street South, Lindsay, private dwelling Details
The author and photographer were part of an original federal government study group, set up by the Lindsay Public Library, to carry out an inventory of historic buildings in Victoria County. As the project developed, we realized that the richness and variety of our local architecture demanded more than mere cataloguing. Accordingly we publicized these buildings through the Lindsay Post and Peterborough Examiner, in public slide shows, and in a series of Cable TV programs covering all aspects of the county’s architecture. Having made such an auspicious start, we received a further provincial grant to write a manuscript describing the county’s architecture and social history. This book is the product of these two government programs. In it we analyse first the historic development of the area and then the area’s architecture and its relationship to Victoria County’s early history.
Because of the limits of time we have chosen to outline Victoria’s economic development in the nineteenth century through the use of the Canadian Censuses for the years 1851, 1861, 1871, 1881, 1891, and 1901. We have also sketched out the more important political and administrative facts. But the emphasis is on the analysis of the county’s material development and how this relates to architectural expressions hopefully future historians will be found to go into the personal and social history of the area and thus expand on our beginning to intellectually analyse the county’s development. The historic maps suffer from certain problems of interpretation, for example, the exclusion of hay due to its being measured in tons while all other significant crops were in bushels. But we have attempted to standardize measures and to select those crops and products relevant to measuring prosperity. 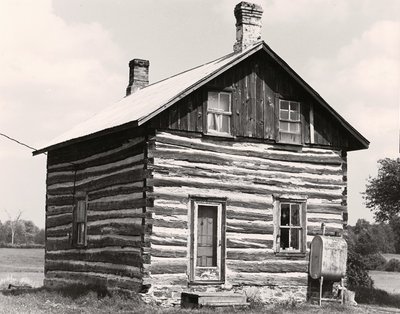 Log cabin, Glenarm Details
Unfortunately, due to the limits of space, we have had to exclude many fine buildings. But we have tried to give the reader some idea not only of the best architecture but also of the more typical or unusual. Thus we have included examples of common frame and brick houses, duplexes, commercial blocks and even a factory. The common and industrial were all part of the nineteenth century milieu as well as the prosperous merchants’ house or such public architecture as churches, schools, and government edifices. We have attempted selectively, then, to give the reader a total picture of nineteenth century building in Victoria County.