We are grateful for the opportunity to work here and we thank all the generations of people who have taken care of this land for thousands of years. We recognize and deeply appreciate their historic connection to this place. We also recognize the contributions of Métis and other Indigenous peoples in shaping and strengthening this community.

What is a Treaty?
If you are a citizen (Indigenous or non-Indigenous), immigrant or visitor of Canada you are a treaty person. Few Canadians know much about treaties despite their foundational importance to the Canadian nation. The treaty is a living agreement between First Nations and the Crown for the benefit of all people who live in treaty territory. Treaties are recognized and affirmed in Canada’s Section 35 of the Constitution Act, 1982. Ontario is covered by a total of 46 treaties and other agreements, such as land purchases by the Crown. The treaty making process between Indigenous peoples and the Crown was formally established by the Royal Proclamation of 1763 following the Seven-Years War. As European settlement began to increase, agreements needed to be made in order to ensure peaceful relations, and resource sharing among Indigenous and non-Indigenous peoples. The treaties established are still as relevant today as the day(s) that they were signed.

The Government of Canada “recognizes” a total of 70 historic treaties in Canada signed between 1701 and 1923. These treaties include: Treaties of Peace and Neutrality (1701-1760), Peace and Friendship Treaties (1725-1779), Williams Treaties (1923), Robinson and Douglas Treaties (1850-1854) and The Numbered Treaties (1871-1921). When treaties were first being established, both parties were recognizing the importance of securing their futures and relations with the land. Many, if not all the treaties, established a basis for peaceful and respectful relations between the Crown, Indigenous peoples and the land.

It is important for all Canadians to be aware of, and understand the initial treaties and agreements between settlers and First Nations. These initial treaties and agreements were about coexistence and mutual obligation. If you own property or plan on owning property in Canada, you are exercising a right that goes back to the very first signed treaties. In addition to the once peaceful relationships developed, the failure to uphold these initial agreements have resulted in a history of discriminatory legislation and policies that worked to found the Canadian state.

Information provided by The Land Between. 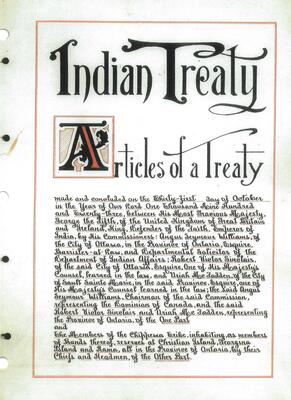 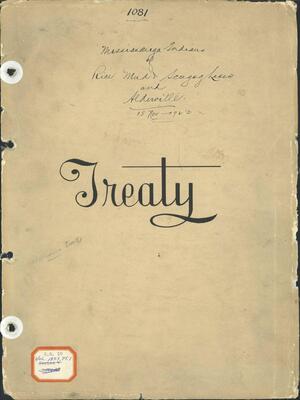