We Are All Treaty People: Indigenous History in Kawartha Lakes
Main Menu → Previous Panel → Next Panel
Residential "Schools" or Industrial "Schools"
Panels
What is a Treaty?Treaties of the Kawartha LakesTreaty 20: Rice Lake Land SurrenderIndigenous Peoples in the Kawartha Lakes Treaty RegionsManita: An Indian LegendManoomin: The Good SeedThe Indian Act, 1876Residential "Schools" or Industrial "Schools"Truth and Reconciliation
Canada's Dark Past
Residential Schools or Industrial Schools were government run religious schools that permitted the kidnapping of Indigenous children from their families to assimilate them into Euro-Canadian society. In addition to the trauma of being taken away from their families, many Indigenous children endured sexual, verbal and physical abuse. Disease and poor sanitation resulted in the death of an estimated 3200-6000 children. Due to incomplete historical records, the number of school-related deaths varies and remains unknown. The last residential school closed in 1997, leaving a long legacy of trauma and destruction in many families.

Information provided by The Land Between

Alnwick Industrial School
Industrial "schools" were the precursor to Residential "schools." The Alderville institution was established in 1848 and was one of two such "schools" opened following the report published by Dr. Egerton Ryerson. The industrial "schools" purpose was to solidify colonialist roles. The boys and men were sent out to the field to learn how to be carpenters and farmers. The women and girls were brought inside houses to learn domestic activities, no longer allowed to do certain harvesting activities or work in the wild rice fields.

The Peoples were more self-governing when it came to the Industrial "School" and were more willing partners in its establishment. They wanted their children to not be cheated by the colonists and wanted them to be able to survive in the agricultural society growing around them. The Michi Saagiig (Mississaugas) of Alnwick (Alderville First Nation), Mud Lake (Curve Lake First Nation) and Rice Lake (Hiawatha First Nation), Scugog First Nation, Chippewas of Lakes Huron and Simcoe, and Chippewas of Saugeen had their gunpowder issues discontinued and the value of that powder was applied to the creation of this "school." Children from the Chippewas of Lakes Huron and Simcoe, Saugeen and Owen Sound; and Michi Saagiig of Alnwick and those of Rice, Mud, and Scugog Lakes; and some children from Garden River attended the Alnwick Industrial "School." It worked in partnership with the Mount Elgin Industrial School, later the Mount Elgin Institute or the Muncey Institute.

The management of the school was given to the Wesleyan Methodist Society with an arrangement where the Indian Department "ensured" the buildings and paid the Society for the board, clothing, and education of each child. Though this money was paid by the department, the money actually came from the Indigenous Peoples themselves where they consented to set aside one-quarter of their annuities for this purpose.

As time went on and their indigenous language might become targeted for removal within the school, the chiefs, community leaders and parents took the authority they had to refuse to send their children or removed their children from the institution and stopped sending money to pay to continue the education. The "school" was discontinued after running for six or seven years. A report from the Indian Commissioner in 1858 recommended that the government occupy space in the house previously used for the "school" to prevent the building's decay. The original "school" building was used as a schoolroom and Council House until 1880 when the building was too dilapidated to continue being used. The building was torn down and rebuilt smaller with the existing materials for a schoolhouse and Council Chamber, which was opened in 1882.

This schoolhouse continued to be used for education until 1967 when it was closed.

Read more in this article from Today's Nothumberland and see details from the Rice Lake Archives here and here. 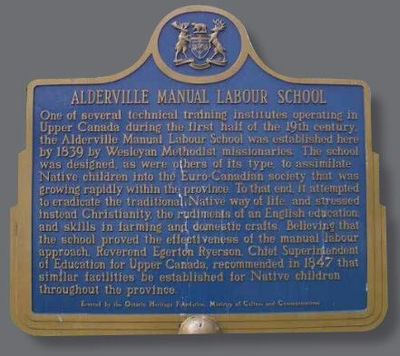 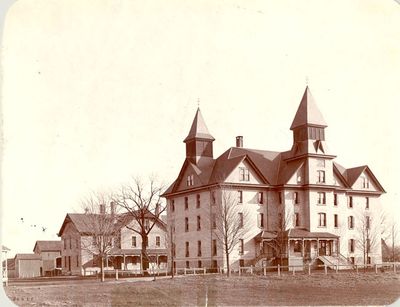