We Are All Treaty People: Indigenous History in Kawartha Lakes
Main Menu → Previous Panel → Next Panel
Manoomin: The Good Seed
Panels
What is a Treaty?Treaties of the Kawartha LakesTreaty 20: Rice Lake Land SurrenderIndigenous Peoples in the Kawartha Lakes Treaty RegionsManita: An Indian LegendManoomin: The Good SeedThe Indian Act, 1876Residential "Schools" or Industrial "Schools"Truth and Reconciliation
What is Manoomin?
Manoomin is the word for "good seed" or "good berry" in Anishnaabemowin/Ojibwe. Wild rice is Canada’s only native cereal. It is a wild grass that grows from seed annually and produces a very valuable grain that has been used by the First Nations people from parts of North America, as food, for thousands of years. The natural rice bowl extends over an area west of Lake Superior to Southern Manitoba, Ontario and into adjacent states of Minnesota, Wisconsin, and Michigan. Many lakes and rivers have received their names from the presence of wild rice within them; the most well known is Rice Lake in Ontario, part of the Trent-Severn Waterway, which is possibly the largest of these waterbodies in Canada. In September, during the rice-harvesting season, muskrat, fish, ducks, geese, and migratory birds can be found in Rice Lake by the thousands. Wild rice filters the waters, binds loose soils, provides protection from high winds and waves along the shorelines, and provides habitat for species at risk, such as least bittern and black terns.

What do Indigenous peoples use Manoomin for?
It is a culinary staple as well as a spiritual and cultural one. It is also used medicinally, by mixing herbs in cooked rice to make poultices. It is also widely used a spirit offering for ceremonies such as funerals. To express gratitude to the spirit provider for the gift of wild rice, people give offerings of thanks and act as respectful stewards of this valuable resource. For these reasons, some Anishinaabeg communities believe strongly that wild rice should be a wild harvested food, not a cultivated crop.

Information provided by Plenty Canada and the Rachel Carson Center for Environment and Society.

The Pigeon Lake Debate
Pigeon Lake, just south of Bobcaygeon, is the site of an on-going debate with local cottage landowners and Williams Treaties First Nations. The Indigenous community state that they have charter and treaty rights to allow them to harvest and that these rights are being disrespected. Cottage owners, while fine with harvesting, are upset with the seeding of manoomin in Pigeon Lake and how it effects boat passage safety and value of their properties.

While there has been consensus between all parties for some issues such as the safe navigation of boats through the rice beds, there is not much agreement on what should happen next. A documentary exploring the debate and providing more information about manoomin called Cottagers & Indians was released in 2020.

Check out articles about the Pigeon Lake Manoomin debate from Kawartha Lakes This Week here and here. See also an article printed in Windspeaker Publication about the issue written by Drew Hayden Taylor, the director of Cottagers & Indians. 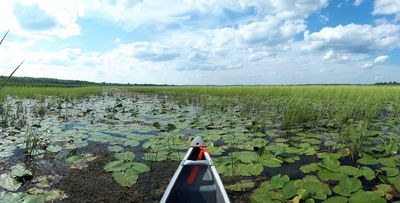 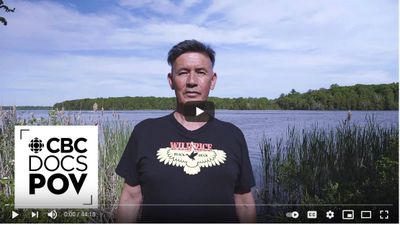